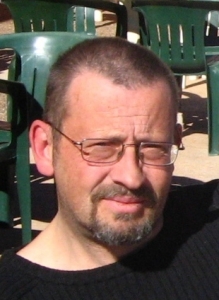 1963 – First clumsy but instructive approach to oil painting. My mother was an amateur painter before I was born. I’m the last of four boys. She didn’t have time to paint any more. All hers equipment was stored in the cellar. Influenced by the rhyme « oil painting is very difficult, but it is much more beautiful than water-based painting, » I never stopped worrying about Mommy hogging her tools and paints. From war weary she gave in. As I diluted the gouaches with water, in my logic as a budding artist I went to the kitchen to get a bottle of table oil to dilute the « oil » paint! A very instructive mistake, because from this first approach I understood the importance of deepening the technique. I have been working on this from the beginning.

1964 – The whole family moves to Tahiti in the South Pacific for 3 years. I inevitably immerse myself in light and colour. But I remained very classic in my self-learning. Mainly studying techniques and evolutions through the ages from the Van Eyck brothers to the great Masters of the Renaissance. For ten years this remained my main hobby. My passion already!

1970 – I make my first sale. And sporadically gets orders.

1975 – First participation in a group exhibition as part of the 36th exhibition of the Friends of the Arts in Tarbes, of which I became Secretary General two decades later. From then on I expose several times a year in various amateur shows in the greater Southwest. I am sometimes awarded prizes, cups and medals by the juries of the fairs, the public or by the local press. (La Dépêche du Midi / La Nouvelle République des Pyrénées), and made some sales.

1976 – First solo exhibition at the « La Cadrerie » gallery in Tarbes.

1980 – Faced with the request I open a graphic art workshop with my brother Franck under the name « 2 Kit contact ».

I was therefore successively hired as a graphic designer, photo-engraver by a printing company (Printing Council) then a screen printing workshop (SEPMA SA), incidentally I made replacements for the layout of issues of La Nouvelle République des Pyrénées which still had a production unit in Tarbes

1990 – Having difficulty managing the growth of my company, which is expanding too quickly, I unfortunately associate myself with a crook that bankrupts the company within a few months. In the meantime I was hired as a graphic designer illustrator by the J. C. Bilhet printing company at Ibos (Hautes Pyrénées – Franc).

1992 / 1996 I cumulate various little jobs while continuing my painting and learning about stained glass techniques.

1998 – Upon presentation of my work I get a 2-year agreement with the Atelier du Vitrail in Tarbes.

2000 – I create my own workshop for the creation / restoration of paintings, works of art and stained glass in Tarbes under the brand « Arts et Vitrail » supported by the Fondation de la Deuxième Chance.

2002 – Mr Michel Giraud, former Minister of Labour and founder of the Fondation de la Deuxième Chance, devotes a chapter of his book « REBONDIR » to my career.

2004 – Centre Pompidou hosts an exhibition of my works on the initiative of Vincent Bolloré, who is sponsoring all the logistics of this operation as part of Fondation de la Deuxième Chance. I also realise several sales through a boutique located in the Centre.

2005- I was invited on March 31 I am invited to the opening of the Direct 8 channel on the initiative of Erik Orsenna member of the Académie Française who had noticed my achievements during my exhibition in Beaubourg and suggested that I be a representative of French craftsmen on this occasion.

2009 – Disaster. A severe water damage flooded the entire cellar where I stored my previous creations that had remained in France. After the firefighters cleaning out, almost nothing can be spared. 50 years of archives of various creations end up in bulk at the dump!

2010- Return to France, opening of a stained glass workshop at the Château de Saléchan 65. Under the « Arts and Deco » brand.

2015 – I deepen my knowledge of acrylic techniques aiming to produce more without being hindered by oil-related drying time constraints.

But I don’t give up on each other, acrylic is not suitable for the same effects and renderings However, I free myself from my old influences to develop a more personal style.

2016 – I produce « The Beast and the Helicopter » Series dedicated to the Special Forces Helicopter Regiment and exhibit the whole thing during a reception day.

Wanting not to be locked in a frame as an animal painter or an army painter or to have to copy myself for life, I decided to countersign my paintings with a « Sérailrail Painter » stamp.

In this logic I prepare several series, each with a common theme or style as its main theme.

2018 _ In recent years I use to work as a master glassmaker on about forty churches in France and then on behalf of individuals or architects in France and abroad.

I give up my stained glass workshop and take early retirement to devote myself only to my painting.

2020 – Exhibition of ten paintings as part of Culot’Thé day at the Hotel Brauhauban in Tarbes in tribute to Women’s Day.

– New video on You tube >> https://www.youtube.com/watch?v=IqVqsca6abA